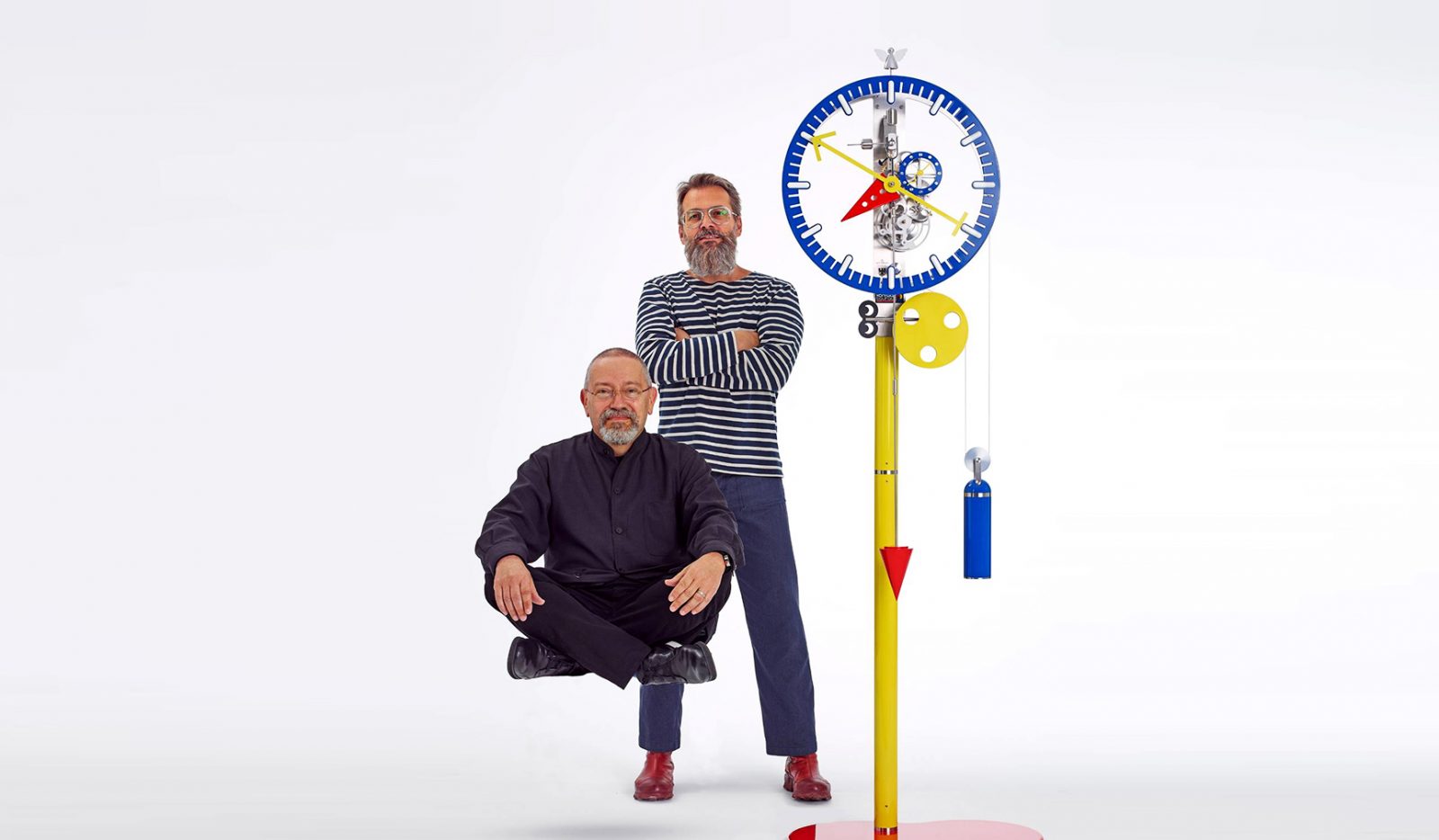 The Negroni Sbagliato: An Accidental Twist and Ingenious Recipe

Few collaborations were so eagerly awaited as that of Alain Silberstein and Philippe Lebru, the French avant-garde watchmakers credited with reinventing the craft. Presented by visionary brand MB&F, the resultant brainchild is the Kontwaz Bauhaus 2 (KB2), an imaginative fusion of the respective artistry that brought each maker fame.

Turning the world of watchmaking on its head in 1987, Alain – a trained architect and industrial designer – ushered in a new modernity with his eccentric Bauhaus-inspired designs of primary colours and playful lines. While in the cradle of clockmaking at the French-Swiss border, Philippe has crafted award-winning designs for over 25 years from his UTINAM Besançon manufactory, most renowned for his revolutionary ‘self-balancing’ pendulums.

Breathing new life into the practices and spaces of tradition, the pair are radical artists at the frontier of progression, and simultaneously custodians of shared histories: of watchmaking, creativity, and humanity. In the end, the work of Alain and Philippe operates as a sort of magic, preserving that precious thing – time – which constantly evades us.

Take us back to your very first watch design: where were you at the time, how was the process, and what was the final product like?

Alain – In the early 1980s, I started designing small watches with messages, inspired by what Swatch was doing. The discovery of mechanical movements inspired me from the beginning and I created my first chronograph watch, the KRONO, which was presented at my first Basel Fair in 1987.

Philippe – The very first design…was a patented mobile concept that came in a case designed and made to order in the French Jura. Inside this little case were multi-tiered runners that made it possible to stack the visible components that constitute a watch, offering a choice among four cases, six straps, six hands and forty-two dials specially designed by young artists for the “Typik” collection…Clients could personalise the dial themselves. And so each one was able to enjoy a one-of-a-kind watch at a reasonable price.

Are there any areas or details in the KB2 where the intervention of one of the two designers mostly affected the sphere of the other?

Alain – Philippe gave me “carte blanche” to redesign all the elements constituting his clock movement. I was thus able to understand the originality and discover the beauty of this movement. It was a dialogue between two creators, a source of enrichment for both of us, a way to get to know each other better. This is also what artistic collaborations are all about.

Philippe – LEBRU X SILBERSTEIN was the first collaboration for UTINAM…This exercise naturally required open-mindedness for everyone involved, sharing points of view to open up new avenues. It was a bit like two parents trying to agree on how to raise a child. We always talked about each element that went into KB2, since each piece had its share of form and function.

From what or who do you draw your greatest inspiration?

Alain – The creative process is very mysterious. I am in these moments in listening mode, attentive to all that surrounds me, with all my senses.

Philippe – Dream with eyes wide open, moving from one context to the next.

Alain, how do you apply your experience in industrial design and hotel architecture to your present craft?

I used to say that going from interior architect to watch architect is only a question of scale: from a millimeter to a tenth of a millimeter. An architect is a “maître d'œuvre”, someone who masters his work by dialoguing with all the specialized companies necessary for the realization of his project. My training and experience as an architect helped me a lot in this professional transition: learning the history of watchmaking, discovering the different techniques used to understand mechanical movements, the construction of cases and other watch components, etc.

Philippe, how has the culture and history of Besançon most profoundly affected your approach to your craft or your philosophy of life?

Besançon is a city on the border that passes the time, and sometimes tries to hold time or control it. I found myself in the place where time appears to have defined the arteries and organs of the city. Time continues to flow here in order to convince us that it is constant. In fact, UNESCO just registered the Franco-Swiss watchmaking country for its craftsmanship of mechanical watchmaking and art mechanics.

There is always certain talk about smartwatches and mechanical watches, and why the latter are so passé. What are your opinions on the matter?

Alain – A smartwatch is a kind of multifunctional Swiss Army knife that can be useful in certain circumstances. But its obsolescence is programmed. A mechanical watch measures the most intimate thing of all: your personal time. It is an object charged with emotions that is passed on from generation to generation. Creating beautiful objects that measure one's time is what guides me.

The modern “French touch” in horology has always been a bit quirky and irreverent. How has the legacy of designers such as Roger Tallon influenced the creation of the Kontwaz Bauhaus 2?

Philippe –The “French Touch” is the heir to a culture distinctive for its innovation and creativity. UTINAM is the originator of a new kind of clock-making that is well-suited to its time, once more bringing the standing clock to centre-stage. Roger Tallon is considered the forefather of French industrial design, in particular for the TGV and furniture that asserts a colourful, innovative aesthetic. [The Kontwaz Bauhaus 2] shares that very daring “Frenchie” boldness that pushes back the lines.

How did the outside-the-box approach typical of MB&F motivate or empower your design choices in this project?

Philippe – Our creative concept is guided by the desire to bring the clock back into the home or the family: to bring back that great, mobile, standing – almost living – figure…in many ways, thinking outside the box is the UTINAM signature, considering its visible clock movements.

The KB2 is limited to just 88 pieces. How do you think this changes the buyer’s relationship to the piece? Could you envision one eventually going to auction?

Alain – A first limited series is important because it inscribes an artistic work in time. Others may follow but they are different, enriched by this first experience. Many collectors like to own a first edition piece, the one that started it all. I have had clocks sold at auction before; it will be the same with the Kontwaz Bauhaus 2.

How would you define your guiding principle(s)?

Philippe – Observe the past, imagine the future.

Within the rich history of the art of watchmaking, how would you like your designs to be remembered?

Alain – Once created, my watches and clocks no longer belong to me, they have their own life. That they continue to give pleasure to those who receive them as a gift from their parents, and to those who wear them, will be the most beautiful of achievements.

Philippe – UTINAM is distinctive for its inventiveness and its patents, for its assertive aesthetic approach, and for its language that brings a great symbol back into the home. With this collaboration, UTINAM (which is also the motto of Besançon) has just released a UFO that could become a reference in the large-format clock-making art…so watch this space.

With backgrounds and careers that span the globe, we’d love to know – what is your favourite city? And what are the top 3 spots there you’d recommend to your best friend when he or she’s in town?

Alain – I was born and raised in Paris. Wandering randomly through great and inspiring cities is my greatest pleasure. Being surprised by neighborhoods and architecture, stores and galleries, parks and gardens, by food, colours and smells. Just sitting on a bench and watching people. With this pandemic, I miss Paris, Tokyo and New York.

Philippe – I can especially recommend that you come to Besançon, the magnificent City of Art and History. Stay at Le Sauvage, dine at Le Parc, discover the Musée du Temps, have a drink on Rue Bersot…And while you’re at it, come visit our gallery and our manufacturing workshop.

How would you explain your profession to a child?

Alain – I draw watches and clocks as he/she draws houses or flowers. There is no difference.

Philippe – Take a piece of wood, sculpt it, and bring it to life with a long nose… 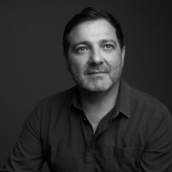 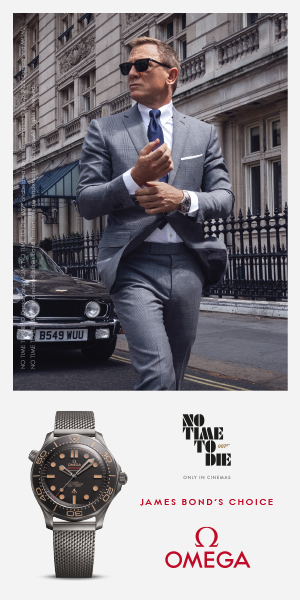 The Return of the Dark Seahorse: The New TAG Heuer Aquaracer Models